If you’re anything like me, lately you have found yourself trying to cook up strategic five letter words to feed into Wordle, a daily word game that has become popular enough recently that the New York Times succumbed to the temptation to acquire it. In this post we’ll derive a set of five words optimized to increase your chances of winning.

How to Play Wordle

Your goal in Wordle is to determine a secret five letter word. You’re given six chances to guess the word, and each guess yields clues about the secret word. For example, suppose you guess the world UNLIT and are presented with the following:

Wordle is telling you that:

As you guess more words, you’ll get more clues, eventually allowing you to make a precise guess about the secret word and win the game. Hopefully!

Let’s play a little bit of Wordle and see if we can suss out a strategy. We’ll open up Wordle and guess our first word, ZAPPY:

There’s a couple problems with our first word guess, though. First, Z is a rarely used letter in the english language. We’d be better off guessing letters that are most commonly used (assuming the secret words aren’t biased!). Second, there’s two Ps in ZAPPY. We don’t learn anything from that second P, so we wasted a whole letter slot. We could know two letters right now instead of one!

Let’s guess another word and see what else we can learn. Let’s try PANTS:

Again, though, there’s a couple problems with our second word guess. First, we already know P isn’t in our word, why are we guessing it again?! That was silly. We also already know A is in our word, so should we bother with it again? Perhaps, if we were desperate to know the correct position of the letter A, we could use it in our guess in a new position. But here, we’ve wasted that opportunity by placing it in an already known bad position!

Let’s review what we’ve learned about our strategy. We should:

Let’s take a look at two circumstances. Let’s suppose we know either:

A quick scan of the Wordle word list reveals three words composed of the letters T, F, A, O, and L: FLOAT, ALOFT, and FLOTA, but there are 727 words that end in T! So let’s add one more rule to our strategy:

Now that we have a strategy, let’s see what we can do about implementing it. First, we want to guess words with letters that are commonly used. In order to figure out which letters those are, we’ll generate a histogram of how frequently each letter occurs in English words. To do that, we’ll need a list of words. We don’t want to use any old word list, though, we want to use the list of words Wordle uses. To do that, load up the Wordle website, open your developer console (often F12), and prettify the code. Then scroll through, looking for word lists. Ah, here we go:

Those two arrays contain our word list. There’s two, though - why is that? It turns out the first list is the list of secret words (in order, so be careful about looking too close if you don’t want any spoilers!), and the second list is the remaining words in the word list. The lists are mutually exclusive - there are no words from the first list in the second, and vice versa. So the total word list is the combination of both arrays of words. If you’re curious, there’s 2,315 words in the secret word list (6.34 years worth!) and 10,657 words in the remaining word list, for a total of 12,972 words.

While we could build our histogram from the smaller secret word list, that feels a bit like cheating - we’re not supposed to know what those words are! So we’ll build it out of the total 13K word list.

And here’s the result:

So we’ve scored our words and sorted them by score, so now all we need to do is take the top five words from that list and we’re done, right? Let’s take a look!

Oh, whoops. It looks like there’s some degenerate scores in there - some words have the same scores. Also, the top three words have all the same letters, so just grabbing the top five words would violate our strategy to avoid repeating letters.

This is starting to look like a tree traversal problem. Instead of picking the top five words, let’s do this:

We’ll write a recursive function to accomplish this:

Now let’s invoke our recursive function, sort the results, and take a look:

Interesting - all the word list scores are the same! If we alphabetize each word and remove duplicate letters we’re left with the following for every word list: AEORS, ILNTU, DMPY, CHKW, and BFG. So if we consider these results with only letter score in mind, the identical scores make sense. We could have skipped keeping track of the total score, but we couldn’t have known that beforehand, so it’s good that we checked!

We’ve taken into account the letter scores, but we haven’t accounted for positional clues. To do that we’ll assign a score to each word list according to how much positional data it affords us. We’ll loop over each word in the list and keep track of the letters used at each position. Each time we see a new letter at a position, we’ll increment the score for that word list:

Now let’s sort the results and see what we’ve got:

There’s still a lot of degenerate solutions, but we have narrowed things down a bit more. Let’s compare the top and bottom entries of that list. We’ll arrange them vertically so that we can more easily pick out positional repeats:

While there are no positional repeats in the first list, the positions of the letters E and O are repeated in AEROS and BEFOG in the second.

The top twelve solutions are degenerate - per our strategy, they will all yield the same results. Some of those words are a little bit more weird than others, though, so I’m going to make an opinionated choice and select the following as the best, least weird set of words for our final solution:

Now, let’s give it a shot! We’ll open up today’s Wordle and plug in our words, starting with AROSE:

Aha, we got two letters, and lucky us, we know where they are. Let’s continue with UNTIL:

Great, we got two more letters! This is probably enough to guess the word, but let’s keep going with DUMPY: 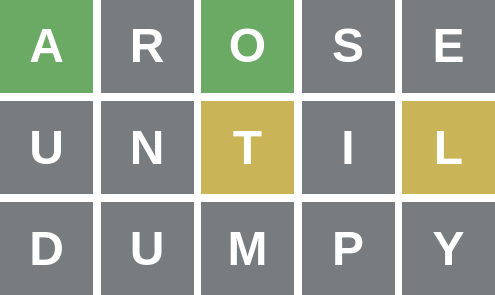 No luck! Next, WHACK: 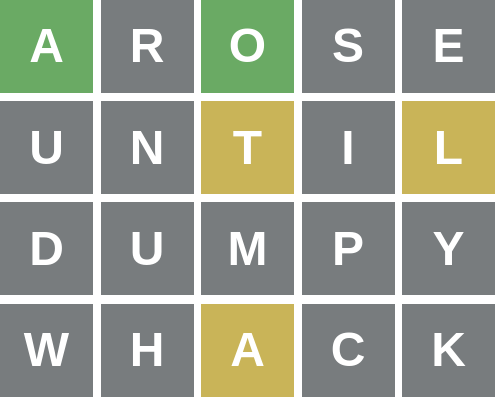 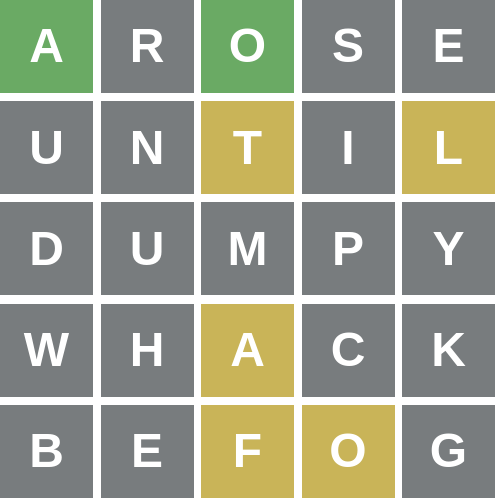 Aha, F! We have all our letters now, A, O, T, L, and F. As mentioned earlier, there’s three words with those letters: FLOAT, ALOFT, and FLOTA. Only one of those has an A and an O in the first and second positions, respectively, though. Let’s try it: 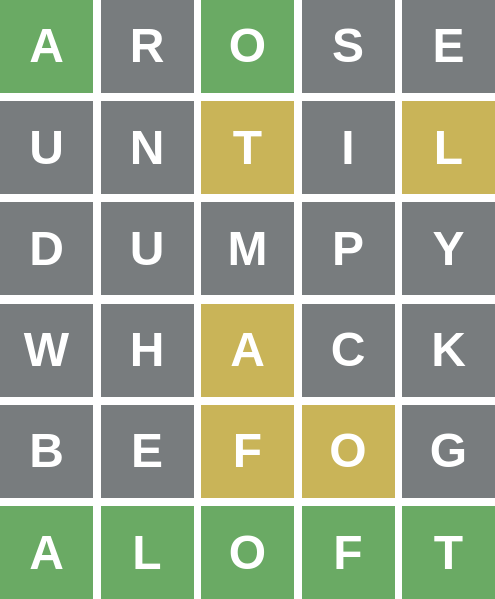 Thanks for reading this far. Hit me up on twitter if you’ve come up with your own optimized set of words, I’d like to try them out!